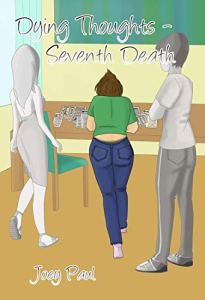 on his comeback tour. There were rules, but what he didn’t know wouldn’t hurt him, right? But things don’t always go as planned, a few days into her freedom and her life is turned upside down with news of a horrific accident. Her father was in critical condition. Gone were the carefree musings of the college student as she is forced to face a horrifying truth. But there is more to the accident than meets the eye, a vision reveals flaws in the tale she is being told, but no one will listen. Can she uncover the secrets surrounding the true events without once more putting herself and those she loves in the crosshairs? And will anyone believe her before it is too late?

Seventh Death is the seventh book in Joey Paul’s Dying Thoughts series. Having following the series from the beginning I can see not only the character’s growth as she matured but the author’s as well. As Tara ages, her monologue has shifted from child to young adult, and her life has been anything but easy. Written in Tara’s first-person perspective you are pulled into her world. The plot is well-conceived with attention to detail. Visions, intrigue, suspicion, love, and danger fill an emotional journey that will keep you glued to the page until the very end. I look forward to reading Tara’s next adventure as she continues to pursue her goals and deal with the repercussions of her gift.