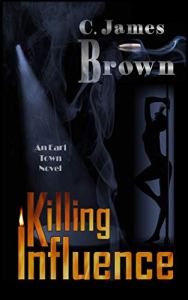 Earl Town finds himself in more trouble than he could imagine. His previous fame attracted attention, which was great for his detective agency, right up until the mob boss seeks him out. The two deaths had both been written off as unsuspicious, but given that the mobster’s granddaughter works for the same talent firm as these social media stars, and happened so close together, this protective mobster has made a connection he doesn’t like and wants Earl to investigate. If only it had been as cut and dry as a strange coincidence. P.I. Townfounds himself under mob escort, trying to crack a case even the police had turned their backs on. The further he digs, the more trouble finds him, and now not only the mob have him in their sights, will he survive to find the answers?

Killing Influence is the second book in C. James Brown’s Earl Town series and makes for an excellent read for lovers of a good murder mystery. Earl Town is a remarkable character, who skillfully navigates his way through an extensive plot, uncovering surprises and connections that will astound the reader. I really enjoyed watching everything come together so expertly as the dots are connected, suspects are interrogated, and clues are gathered. This really is a perfect murder mystery and, with its delve into influencer and social media marketing, has a very modern setting. I particularly liked how Town was unfamiliar with the scene and the true to life reactions and astonishment of one who suddenly discovers that influencers are the new celebrities for the younger generations. His humour made me smile, and the escalating sense of dread continued to grow as investigations seem to lead the way to a path better left unseen. Murder, danger, and hair-raising twists will keep a reader glued to the page. Killing Influence is certainly a must-read for people who enjoy a well-crafted murder with a strong leading character.