Displaced is a dystopian, fantasy sci-fi written by Stephen Drake and is the first book in 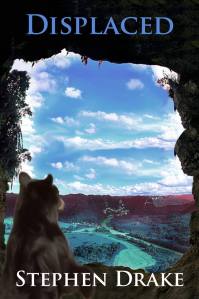 Murdock’s upbringing was considered anything but normal to the masses, raised by his father and uncle he was taught to hunt, to be a survivor. When he awakes on a distant planet he knows these skills will be tested to their fullest. He, and the others in the transport pod, had been rejected. They served no purpose, had no value, to Earth’s new masters. Stranded on a world where survival skills should be the only real currency there are those who crave power above all else and will stop at nothing to obtain it. One such man is Whittier, and he knows all too well how dangerous a man like Murdock can be to his plans. He would rather cast him out than lose control. On a new and dangerous world, where humans are not the apex predator, loyalty is paramount, and survival is not a given. The people here must get their priorities straight if they plan to survive.

I have to say I really loved this book, a phrase I never utter lightly. The characters are magnificent, the plot is gripping, engaging, and casts a light on humanity at its best and worst. Stephen Drake creates an imaginative world wrought with danger and peril, yet humans seem to be the thing to fear most. The author’s style is immersive, filled with great dialogue and breath-taking descriptions. A truly brilliant book for lovers of fantasy and sci-fi. I personally will be eagerly awaiting more work from this talented author.

This is certainly a book I would recommend.