Jake had lost everything the day his wife and child were taken from him. He fought his 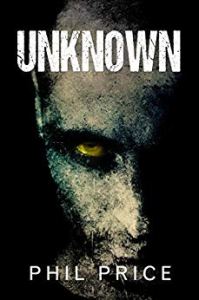 grief, surrendering his badge for a private license. As a police officer he felt powerless, he apprehended villains only for them to be turned loose and commit another crime. At least as a PI he could choose his work. Or he could, until a favour for his brother-in-law drags him into an investigation out of this world, literally. A series of random and unlikely connections lead Jake to discover the world is not as black and white as he thought. There are doors, portals, which lead beyond his world to a place monsters lurk, worse still, they sometimes cross over, hunting. Jake finds himself on the mission of a lifetime. His very life, and  that of those he cares for is on the line. Can he hold back the tides of evil, or will darkness consume everything?
Unknown by Phil Price is a paranormal horror written in an engaging third-person style. I’ll admit to struggling initially to get into the book, mainly because there were a lot of different characters and timelines introduces, all of which are important later in the tale. I enjoyed the attention to detail and the world-building of the alternate dimensions, and the reactions to the different environments. I liked Jake’s character, and he became perfectly complimented by Kathrine. Danger, monsters, and myths unite to bring this tale that those liking anything paranormal will be bound to enjoy. The only criticism I could level was near the end I felt as if I was missing a few chapters, one ended on the cusp climax, and the next picked up when everything was over, leaving what happened a mystery for the readers’ own imagination, and with a second book to follow I imagine answers will be found as the tale unfolds.