Clara was one of only two women practising law in San Francisco, as such she had a lot 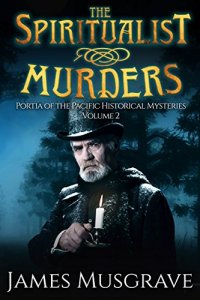 to prove, but she also had good instincts. Instincts that saw her befriend Adeline, a young woman she found in distress. When finally she returned to her senses, Adeline confesses to witnessing a murder, in fact, of the witnesses called she was the only who witnessed it happen, and yet she was refused the right to testify, why? Because she not only witnessed the murder, she heard the thoughts of the one committing it. The killer was set free, and Clara is determined to use Adeline and her perfect recall along with her ability to channel other people’s thoughts and memories to get to the bottom of what happened. But how can you prove something when your evidence is only the word of someone who could be called crazy? You search for evidence of course, but Clara must be careful, the killer believes he can control anyone, but why commit these acts in the first place, is it to show their power, or is there something else afoot?

Written in a style suitable for the era James Musgrave’s The Spiritualist Murders:  Portia of the Pacific Historical Mysteries book 2 delivers an intense and vivid scene of San Francisco in the 1880s. While I can’t speak to historical accuracy due to unfamiliarity, the feel of the work if very authentic to the time. Musgrave possesses an enjoyable narrative that will appeal to a mature audience, as well as those who enjoy a well-worded and conceived plot. As a murder mystery, you are of course asking yourself the how and why, and the spiritual twists gives this book a little something extra. Controversy, challenges, sexism, manipulation, and agendas both concealed and visible drive the mysteries and the characters forward in a novel that is bound to please lovers of the genre who are looking for something just a little bit different.