In Emil Jersey’s Blood, Sex and Violence, A Vampire’s Rebuttal, Jersey was recognised as 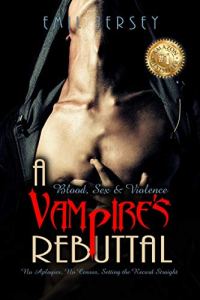 ish-mikhan, a fix-it man, when he was but a boy. Cut and trained, his role is to bring pleasure to any he meets. Passed between elders he learns and hones his skill, rising to favoured and becoming the glorious being he should be. His master’s will is his will, and yet he knows their minds best, what will elate them to a state only one of his kind can induce, but in turn from each new master, he learns something new. Favoured by almost all, spoiled, Jersey reveals all from the age of seven onward.

Blood, Sex and Violence is part of Ellen C Maze’s The Rabbit Saga, while this book is attributed to Emil Jersey, the character whose experience it encompasses.  It isn’t necessary to have an understanding of the other works, as this is more of a spin-off detailing a particular aspect of the Rakum, specifically one whose gift is in giving pleasure to others. I enjoyed exploring Jersey’s character in depth, learning how he sees himself and others in this mature read. It was great watching him grow as his time with each elder tempered and honed different aspects of his talent. Sensual, erotic, a little humorous, and enlightening this is a great addition to the saga allowing the reader to delve deeper into this world. This naughty but nice read will appeal to readers who enjoy mature content, orientated around some vampire lore, sex, and violence. No two masters are ever the same, and this explores the different facets, and also delves into the bonds and relationships formed.