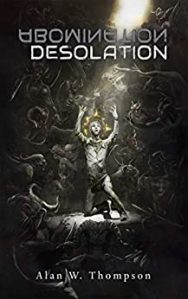 everything to destroy Cenetics. Even his wife had looked upon him with disgust as she realised what he had done. He had been labelled a terrorist and placed in a facility where visitors were forbidden. A vision warned him of what is still to come, that all he had done had not produced the results he needed. Somehow Cenetics was as strong as ever, continuing the research that they had stolen and twisted to their own design. By the time he is allowed a visitor he worries it is already too late, heaven and hell are at war and the end is coming. They cannot prevent the inevitable but, perhaps, if they act now they can delay it.

Alan W Thompson’s Abomination Desolation is the second book in the Creation Abomination series. Although I have read the first book I can confidently state it also works well as a stand-alone read. This merging of Christian fiction, sci-fi, and thriller is perfectly executed. Despite its Christianity orientated vein I never felt like religion was being forced or oversaturated. It was used as a means to create a compelling narrative and advance the plot which focuses on the approach of the end of days. I thought the translation of other languages by annotation was a really nice touch, allowing the reader to see the meaning without having to load up translate on their kindle or pc. With high stakes, action, and a growing threat, William, Rich, and Tara are thrust into a fast-paced race against the Devil himself. Its descriptive narrative leaves no question as to the settings and events as they unfold, and while you meet characters from the former book, you are also introduced to new and interesting beings as events unfold. Action, suspense, and a ticking clock ensure you won’t want to look away while the unique plot and great characters will keep you engaged. The end of days was always predicted, but can their actions delay that which is inevitable?