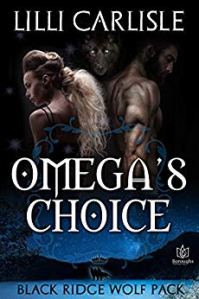 was too old for this. As an alpha, he had attended the omegas’ selection ceremony more times than he could count, but he was never chosen. He thought no woman in the right mind would choose his hulking and scarred figure. He had been scarred in service, his injuries a canvass of the battles he fought, but to onlookers they were hideous, especially since most normal werewolf injuries healed, but these had not been like most blows, and he wasn’t the strongest and most respected alpha without cause. He agreed to attend just once more. Little did he know, this time, fate had another destiny in mind, but even if he were to be chosen there are forces in play that threaten the safety and purity of all the omegas present. Dark forces lurk, and Aldric must confront them if he has any hope of pursuing a future he once believed to be nothing more than an outlandish dream.

In Omega’s Choice, you are introduced to a brilliant and developed cast of characters who will make you grin, cringe, and chuckle, or at least they will when their spirits are high, but cross them and the reader understands all too well there will be no prisoners, no mercy. Which is just as well, as that is precisely what it will take to safeguard everything Aldric loves. Progressing with a slow but steady pace, in third person alternating perspectives, the reader will come to know the cast of characters, witnessing love grow, and fate give blessings. Aldric was warned before attending he would have to fight for his omega, and fight he shall. Magic, alternative realms, and mythical creatures add to the pull of this paranormal romance where danger runs parallel to love. Reading, I had a full sense of the world around me, in part due to Lilli Carlisle’s wonderful descriptions, and the rest by her skill at knowing when to let a reader’s mind fill in the details. This was a delightful read which didn’t heavily rely on the werewolf aspect to make the story, instead, the characters drive the plot. Magic, action, romance, and danger, give Omega’s Choice the perfect combination of ingredients for any paranormal romance.