Alice never really felt she belonged in her school. She wasn’t part of any of the 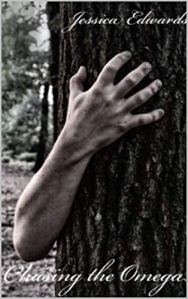 cliques, but none of that really mattered. She had her best friend Sam, and she wanted nothing more. Her mother worked long hours as a nurse, and her father had left them, but she never felt alone thanks to her best friend, and others who had made themselves integral to her life. Things were tough, but she was happy. That was, until the night her life changed forever. The bite from a wolf changed her, in more ways than one. People who had always ignored her were taking notice, and among them was Max, a new student. As she learns more about her awaiting fate she learns about a string of murders, and some hit closer to home than she imagined. Can she discover who is behind these brutal murders, and who to trust before another person falls victim?

Chasing the Omega is Jessica Edwards’ addition to the urban supernatural genre. Written in the first person perspective of the main character, Alice. In honesty, it took me a few chapters to become invested, but once I had, I was eager to discover what was in store for the young protagonist. Feelings run high and trust and loyalty have to be proven, especially when Alice has more doubts and questions than answers. Written in a steady pace Chasing the Alpha offers shifter action, mystery, suspense, and romance. The characters are typical to the supernatural school scene, however, they do have their own personalities and stories, which we learn about through the things Alice is told. The idea was good and the plot intriguing as you try to guess who is behind events and what secret is being hidden. This is book one in the Small Town series, so be prepared for a sudden stop as things start to reach their climax.