Jean Louis’ life had been governed by outside forces, first his Master, then the moon, and 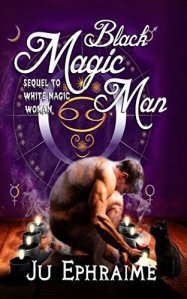 now the woman who had caught his eye. He was a Black Magic Man, or had been until his powers had been stripped ten years ago. Something about this woman, Solange, called to him, so much so he swore he could feel the stir of the shadows, the return of his nature. The most powerful phase of the moon was coming and with it a time when his powers, should they exist, would be at their height, and he would claim her as his own. He swore she was for him, and not even her husband, who Lange seemed to love passionately, could stop him claiming what he believed was his.

Black Magic Man is the sequel to Ju Ephraime’s White Magic Woman, whilst I could not comment as to if the two tales are linked, except by the practice of a black magic, I can confidently state this book is a stand alone story. Lange is the main focus of this erotic paranormal. We meet her and her husband and learn about their love and passion, and especially their intimate life. All the while Jean Louis watches, waiting for an opening to exploit to make her his. Jean Louis seems to use what I believe to be nocturnal Mubobobo to stalk, follow, and hunt the woman he lusts for, and as time passes he grows increasingly more frustrated. It is written in a simple third party perspective that will appeal to people not looking for an overly heavy read, whilst wanting to enjoy details of intimacy and the growing relationships through past recollections and steamy bedroom antics. I enjoyed the subtle cultural aspects of this book, as well as the suspenseful aspects of the plot that keeps you wondering how things will turn out.