Lexi just wanted to learn, she wanted to know how to defend herself. What she couldn’t 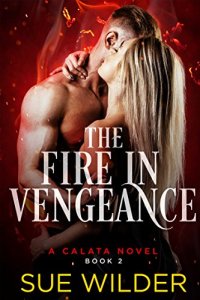 understand was why Christian refused to be her mentor. Their last fight was a big one, he handed her off to Phillipe and made himself scarce. He loves her, so she keeps being told, he wants nothing more than to protect her, him, one of the most powerful beings, made even stronger through their bloodbond. But war is coming, and if Six manages to usurp Three then destruction of the likes humans have never seen will follow. The immortals enforcers, like Christian, are the front line, and those they care for are a weakness the enemy wouldn’t hesitate to exploit. But sometimes a weakness can also be a strength, and some weaknesses can be game changing.

The Fire in Vengeance is paranormal romance and book two in Sue Wilder’s Enforcer’s Legacy series. Whilst there are times it is clear that I was reading the second book in the series, the things not explained or clarified in no way hinder the reader’s ability to enjoy the story even if they haven’t picked up the first. It is written with an elegant prose, where vivid descriptions and engaging dialogue perfectly complement a cast of unique and exciting characters who drive the captivating plot onward. When you pick up this book, you’re picking up not only a paranormal romance, but a gripping tale of past-lives, looming threat, sinister happenings, manipulation, danger, regret, and increasing stakes.  It is hard not to be drawn to the characters, and harder still to put the book down.