Hank’s plan had been simple, take his girlfriend to Dungeon Con, celebrate their one 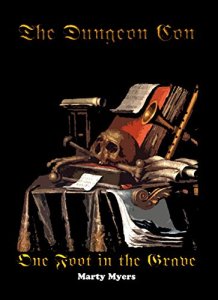 year anniversary, and enjoy the festivities. It was barely lunchtime not only had his relationship come to an abrupt end, but he had been tricked into signing a contract by a being from another realm seeking someone to build their master’s dungeon. The thing was, he wasn’t exactly the dungeon master the imp had thought, but inadvertently he had returned with something much more powerful. A human not afflicted by the boons and caps of the Light all people of this realm were born with. His potential was unlimited, and the Dark had great plans for him, great plans indeed.

The Dungeon Con is Marty Myers’ addition to the LitRPG genre.  It has a solid plot with some great ideas. The character building and situations are designed to a point the reader becomes invested in their story and what will become of them. The original thinking and execution is engaging, interesting, and enjoyable. I’ve given this book four stars, whilst it does need some polishing, you can fix grammar, typos and some narrative perspective complications far easier than a poor plot, and The Dungeon Con has the plot, it just needs the polish.