Desert Rain could have been adored and showered with gifts like any other Hijn. Instead, 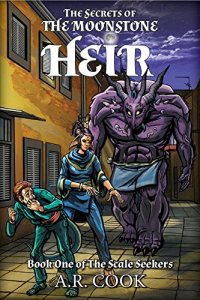 she sought isolation, visiting the town on rare occasion. Keeping to herself led the people there to believe her to be a charmer. Until her secret was revealed. The truth of her identity was the beginning of the end. She sought solace with a Wretched, who had been stripped of his memories by a trickster. They were the enemy, but in him she thought she had a friend. Until one fateful day she found the memories that had been stolen. The cost of returning them had been beyond her imagination. A Wretched now rampages, destroying all she held dear and, worse still, he had taken something from her of such value she had no choice but to pursue. Hoping to save not only those in his path, but the whole world from his cruel distortion.

The Secrets of the Moonstone Heir is the first book in A.R. Cook’s The Scale Seekers series. It centres around Desert Rain, a Hijn who has isolated herself from people, afraid of their judgement. She had been changed more than most, and feared persecution. From the start of the book to the end you see a strength and resolve begin to materialise tempering her into a stronger character. It is written in a soft, easy flowing narrative making it simple to follow and whilst there are scenes of violence they are handled in a suitable manner for a young adult audience, as is the suggestion of a sexual situation. A quest to drive back loneliness becomes a tale of friendship, action, and adventure that paved the way for the adventure to continue.