Boh loved her father, he did so much for her, but if there was one thing he stirred in her 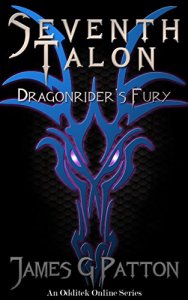 more than anything else it was a love for dragons. So when she got an unusual invitation to become a dragonrider,  it was something she could not refuse. But dragons seldom took women, and thought those with low strength stats were weak. Boh was about to give their world a wakeup call and show them that real strength was a hell of a lot more than a figure assigned to an attribute point. She would play on her terms, and let no man, or dragon, stand in her way. It was just as well, because the path before her is anything but easy, danger is coming, and she is the one standing in its path.

Seventh Talon 1: Dragon Rider’s Fury by James G Patton is a beautifully narrative LitRPG fiction that follows Boh. A young woman suffering from MS who uses VR as a means to live. she is the depiction of a stubborn, hot head, with the not so well hidden heart of gold. She is a great character, she knows what she wants, and how she wants to do it, and no one can tell her otherwise. She is a wildcard, yet fiercely loyal to both herself and those who surround her. Great characters and a plot filled with suspense, mystery, friendships and danger as Boh does all she can to live. this may be a game, but in this land a Champion only gets one life. I look forward to seeing book two.