Elorion was a gamer. He was loving the VR experience, little did he know that when he 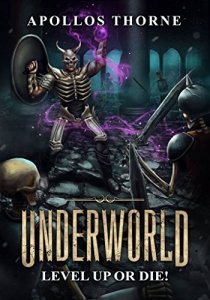 logged off something even more immersive than his favourite MMORPG awaited him. In barely the blink of an eye he was kidnapped, dragged into the Underworld, and deposited in an room of strangers they discover they all had one thing in common, they were gamers. No time was wasted, they were branded and given one very simple instruction. Level up or die. Their new mistress has developed a world that any gamer would dream off, and by fulfilling their own fantasies and gaining power, they not only got to live, but also kept her sustained. Survival is paramount, levelling essential, looming on the horizon is a threat more powerful than any of them could ever imagine, and if they hope to live, they must play by the rules.

Warning, cursed item cannot unequip. That’s to say I really couldn’t put this down. It was such a fun read that I really begrudged parting with it. Well written, entertaining, and will hold an appeal to gamers and fantasy lovers alike. I was initially concerned that reading about a level grind would be, well, a grind, but it was brilliantly executed and never became dull. This book goes beyond stat advancement and an intricate labyrinth, and detailed magical system aid the characters in their personal and social development. This really was a great adventure, and I’ll be adding book two to my to read list.