The Library of Illumination is in danger. Knowledge is power, and with each one having 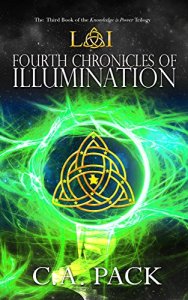 their own diversity there is a danger of one becoming supreme. Why should they not all be the same when uniformity would answer questions with one decisive stroke, and how can this uniformity be brought about? The answer is simple, to destroy them all but one . And someone plans to do just that. War is coming, a war that will decide the fate and wisdom allowed to be retained in all the realms, and it falls to Johanna to intervene, but she has her own problems, whisked away and imprisoned by the Terrorians she must first find a way to free herself and her unexpected allies. Will the realms lose all they fought to protect, or can those on the side of wisdom and freedom of information prevail against astounding odds? Find out in C. A. Pack’s Fourth Chronicles of Illumination, The Third Book of the Knowledge is Power Trilogy (Library of Illumination 9) .

Within the pages of Fourth Chronicles of Illumination you will find an enormous universe filled with different species, cultures, understandings, technology, advancements, and beliefs. Certainly an impressive undertaking which C.A. Pack does not shy away from. The complex design of the work is a testament to the sheer amount of time and consideration that would have gone in to its production. Wars and battles, alliances and prejudices, this book has everything you would find in the real world, but on a monumental scale. Good and bad, it is there for you to discover. As the third book in the Knowledge is Power Trilogy, during the first part I felt I would have benefitted from have read the preceding books, the plot does come into its own to a level you can almost forget others came before it. Some of the characters have a very distinctive style of dialogue, some of which would draw similarities to popular movies in the science fiction genre, but whilst dialect is similar, the individual characters are in themselves unique. This is a massive adventure, with lots to be take in, possibly the kind of book you’d want to read more than once to get a full appreciation for everything that happens. Characters develop nicely and relationships change, as would be expected. This book was a good read, and I am curious to know all the details that led to the current predicament. If you like science fiction which has some great depth then you’ll find Fourth Chronicles of Illumination has a lot to offer.