Writing his father’s biography while the man himself still lives, forced Bernard, or 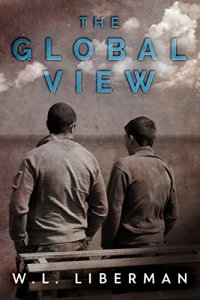 Bernie as he likes to be known, to also put himself under the microscope. His father, Ephraim Goldman, Eph, had written a book called ‘The Global View’, and it was a publishing phenomenon, and fame followed suit, placing Eph in the company of some of history’s legends. Julian De Groot had thought there was no better man for the job than the man’s own son. But his father was as much a stranger to him as to the rest of the world, perhaps even more so. This book was to be a true work, warts and all, but everyone has secrets, and they are often kept buried for a reason. Discover what secrets lie hidden in W.L. Liberman’s The Global View

I loved the narrative style of The Global View, it really pulls you in from the onset. The diversity of characters, from the career woman wife and mother Sharon, Bernie’s wife, to the gate crashing Egan there is such a cast you’ll be hard pressed not to find someone you like. The dialogue flows naturally, and the scenes appear to unfold effortlessly, it’s like reading poetry in motion, crisp and expressive. I loved the familial interactions, some of them, like the scenes with Bernie and his sons, remind me of scenes from my own life. Despite having nothing in common with the story I found it so easy to relate to, a testament to a true writing skill. One we of my favourite things was the letters written by Isaac, they filled me with intrigue as I wondered what part this stranger could have played on Bernie’s mother’s  life, and his  story was everything but as gripping and sometimes surprising events unfold around Bernie. W.L. Liberman creates a believable, realistic plot filled with intrigue and depth.