Lady Catherine disapproval of her daughter’s choice of a partner. The artist David King 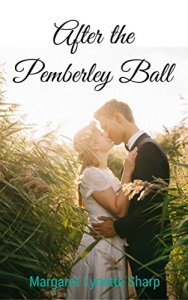 had apparently taken a liking to Anne, although there are whispers it was more about her fortune than any other reason. Anne is not beautiful, and her health is not the best. She makes an easy target and Lady Catherine is concerned she has become just that. Although the rumours seem six of one half a dozen of another, for all the slander there are also whispers of a loyal and honourable man. She forbids their interaction and seeks a distraction to hopefully pair her daughter with a more appropriate suitor, and how better to do that than with a social event, and so Lady Catherine throws a ball, a splendid affair. Georgina’s birthday proved the opportune moment. But Anne has issued her own warning. If her mother refuses to accept the man she loves, and allow them to be married, she will force a scandal of the likes their family have never seen.

After the Pemberley Ball by Margaret Sharpe is a period drama written in appropriate dialect. Interaction is very much what you would expect from such an undertaking, eloquent and formal, much like the tone of the book itself. It is a short read exploring a few weeks in the life of the characters centring mainly from Elizabeth’s viewpoint as she learns of events surrounding those closest to her. There is little in the way of action as it is a tale based more on subtleties and romance, as one would perhaps expect.

After the Pemberley Ball