It started with a buoy, there one minute, gone the next. A similar fate that awaited 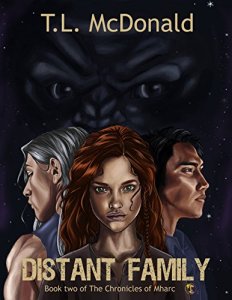 anyone breaking the laws of the Nihili, their minds would be scrubbed, no matter how brilliant they were. If they broke the law they were remade, and from them on they would be allowed to only perform minimal labour. When the buoy had vanished a small spaceship appeared in its place, a craft that by all rights could not have possibly made it this far, and it was on a collision course with Nemori. It poses a threat to all living there, especially given its archaic design. It fell to Commander Mharc to intercept and retrieve it. Within the craft were humans, from the Gaia strain, and they marked the beginning of all her problems. Curiosity killed the cat they say, and it could quite possible kill Mharc, and all those loyal to her.

Distant Family is the second book in The Chronicles of Mharc series but easily readable as stand alone. Any essential information from the first book has been skillfully woven into the story to flush out the characters and explain how they came to be where they are now, and the circumstances surrounding their current situations. I found T.L. McDonald’s writing engaging and enjoyable. His ability to create futuristic technology whilst keeping the premises easily understandable is well executed, as is the introduction of new races. I found myself drawn to the characters, engrossed in their stories, and enjoying their growth and challenges. If you’re looking for a gripping sci-fi set in a place gripped with war, challenges, and conflict the  Distant Family won’t disappoint.