The Elixir by J B Michaels is a paranormal urban paranormal fantasy tale. Bud worked as 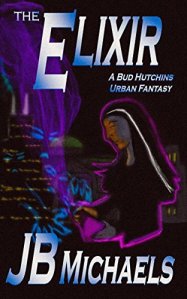 a private investigator, but more recently his payments were going to other ventures. Maeve had been a gifted member of the Order of Saint Michael, she had been killed, her throat torn from her body by a werewolf. It was only thanks to her own skill she survived. If being a zombie, forced to live in a freezer, with an artificial throat and voice box could be called surviving. For some time now Bud’s wages have been going towards finding a means to reanimate her. However, there was a complication she got out. An escaped zombie-werewolf seemed the height of their troubles, until Al Capone rose from the grave as a poltergeist, or at least it appeared to be him. But there was something more afoot, a puppeteer, a larger scheme which grows more complex the further he probes into his latest investigation.

This is a really fun, action packed read. It touches on traditional, classical, and familiar paranormal lore in a way perhaps only seen in things like Scooby Doo and the first season of the tv series Penny Dreadful. I would class it as a hybrid of the two, making it fun, but appealing to a more mature audience. In The Elixir paranormal is a fact, not fiction, and the means employed by such creatures, and researchers can be utilised. From the diary of Victor von Frankenstein to the hidden traits of ancient artifacts. This book has some serious charm.