The Edge by George Benda is a uniquely original historical fiction. It all started with a 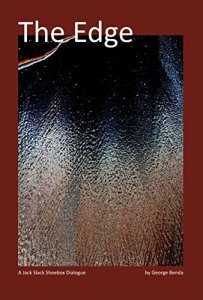 plot, someone was planning to overthrow the government and Jack was in the wrong place, at the wrong time, antagonising the wrong people. His past antics meant he was already on the FBI’s radar. Soon it became apparent that his mail has been tampered with, and his car was being observed. Jack swears his past mistakes are not something he’s repeating, and yet, the more the FBI dig, the more suspicious things they can tie him into, and some of his contacts are causing alarm bells to ring. Connections area unearthed in the strangest of places, and events just didn’t seem to add up. Jack must find a way to discover the truth, before twisted lies built on random links and speculation causes his downfall and destroy the lives of everyone he holds dear.

Written in scenes that alternate between different timelines I initially thought The Edge by George Benda would be difficult to follow, but I was soon whisked away enjoying each part for what it was, be it highly intellectual debate and theories, past recollections, or even romance. It simply worked. Each part adding to the plot and weaving an intricate tale. This is not the kind of book you can just read for a few minutes and pout down, it requires your full attention and it is not difficult to give. It took me until chapter two to adjust to the author’s unique style, but I was intrigued long before. Definitely a moreish read. A combination of science, philosophy, and romance that is bound to charm. This is the second book in a series, but the author provides enough insight for this to stand alone.