Skip to content
February 3, 2017 kjsimmill
Toby had been haunted by dreams so vivid, so real that he questioned his sanity. He 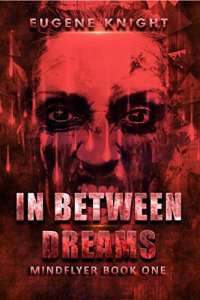 dreamt of murder, but that which plagued him seemed to be more than just a dream. Toby was under the care of psychiatrist Dr Louis who started to have had his own theories, ones he shared with Dr Niles, a specialist is such things. It was not long before his fears were confirmed and Toby came face to face with a vision from his dreams. It became painfully clear he was not losing his mind, at least not in the way he first thought. He was not imagining these brutal killings, he was witnessing them. But what if the link wasn’t only one way, what if the killer knew Toby was there watching, and has plans of his own, a motive beyond Toby’s understanding, but one he is central to.
Written in alternating case between the first person perspective of the protagonist Toby, and the third person narrative of other characters In Between Dreams by Eugene Knight presents an interesting plot that grips the reader’s attention. A window opens into a horrific world, to create a focal point of this psychological thriller that will leave the reader trying to pick through details to discover the truth of before it is revealed. Murder, deception, secrets, and failings all rise to the surface to set the stage of this well-paced and character driven tale. While this book is filed into the young adult paranormal, I would certainly peg it as a more adult read spanning the genre’s from urban paranormal to thriller.

Book link:
In Between Dreams