Morium by S.J. Hermann is an urban fantasy focusing on bullying and supernatural elements.

For a long time Lexi and Nathan have been the focus of the popular students’ hatred. Once an outgoing girl after the 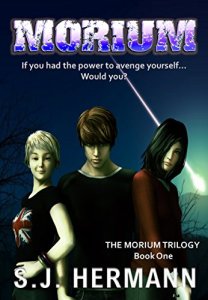 death of her mother Lexi became withdrawn, and those who should have helped her, her so called friends, saw her grief as a means to elevate themself in social status. Lexi retreated into herself. The only release from the torment became self-harming and part of her longed to join her mother. Nathan suffered at the hands of the football team, his skin condition making him easy prey. They tortured him without reprieve. Each day they reminded themselves the end was in sight, graduation was near. But it didn’t come soon enough. One night Lexi and Nathan saw something fall from the sky, curiosity enveloped them, leading them to seek it out. But the moment their fingers touched it their future was changed forever.

Morium is a well-written and moving read. Bullying is a serious issue, and anyone who has been bullied will understand first hand the emotional turmoil and suffering Nathan and Lexi are being forced to endure. Their support structure consists of each other, and their other friend Stacy. But having support doesn’t resolve the issue. S.J. Hermann’s writing style makes it easy to empathise with the characters, and presents a very real dilemma, if a victim of bullying was granted power, power enough to stop those who hurt them, power enough to change the world, how would it be used?  Lexi and Nathan have both endured the same harassment, the same mental torture, but will their view on how their new gifts be used align? This is an excellent plot, and a truly enjoyable read. Emotionally charged, and intensely gripping, Morium is one book not to be forgotten.