Atitalan Emissaries had been sent to guide humankind in evolution. They had been 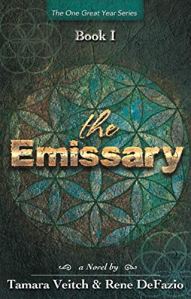 selected to leave their land, to die and be reborn for the span of a Great Year Cycle. They were to guide Humankind, but they should not have been aware of their identity, their mission. But Quinn was, he remembered his time as Marcus, just as he remembered each of his past lives. He also remembered his soulmate, Theron, and sought to find her so they could once more be reunited. Just as there were those sent to guide the world into a new golden age, so too were there those whose skills and purposes were turned to darker purposes. All things in balance, and yet the scale still seemed unequal. Marcus’ childhood friend moves against the Emissaries. He too possesses past life memories and the darker force aiding him will stop at nothing to quash the emissaries and their attempts to guide fate.

The Emissary is the start of Tamara Veitch and Rene DeFazio’s The One Great Year Series. It acts as a foundation, allowing the reader to be drawn into the present day situation before reliving parts of the past which brought the main character, Marcus aka Quinn, to the point he now finds himself. This book sets a great background and starting point for what could be a gripping series. There had been clear attention paid to detail, characters, personalities, and rivalry. There are some good ideas which can be viewed as both historical and futuristic, and some interesting play om myths and legends. I enjoyed the steady pace and rising tension as the understanding of what is to come becomes clearer. Alternative history meets low/ urban fantasy to create a battle of light vs darkness that spans the reaches of time.