The elves didn’t believe in an afterlife, you were either dead, or alive. So when Dreyah, 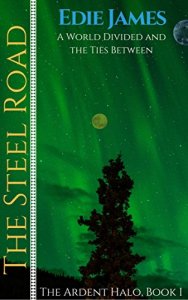 the prophesied human/elf crossbreed whose death would spark war, was found murdered by some magical ritual, the thought of her returning had not been imagined. But death did not want her, yet. It was not her time, and thus, it rejected her, sending her back to the living. Thoughts of the two bloods within her giving her two lives surfaced to explain away the strange phenomenon, but she had not been convinced. Dreyah knows she must avenge her murder, and seeks to find her place. She is both elf and human, and also the spark of war. She must choose a side, choose which blood her loyalties lie with.

The Steel Road by Edie James is the first book in The Ardent Halo series. It is a complex coming of age tale ripe with politics, agendas, deception, and magic, both made by machine and nature. Houses and factions are driven by their own beliefs, and the guidance of The Four and their chosen. But even those thought touched by the divine are not beyond manipulation. The Steel Road is immensely descriptive with impressive world building, along with myths, legend, history and lore. Magnificent scenery will leave vivid impressions, while alliances and agendas drive the complex thread of a very involved plot. This world is divided, elf, humans, and the space between where war once raged, each side is different, each side has its own levels of development, and the contrast makes for a fascinating transition in what I would have to call a steampunk high fantasy cross. Engaging, immersive, and very much alive, this is a tale you wont soon forget. For readers who find it difficult to follow houses and alliances, there is a short comprehensive appendix at the rear, ideal if you plan to read it over a few sittings and become hazy on some of the details. A strong first book in what promises to be a fascinating series.