An Initial Countdown: A Haszard Narrative, by Kevin E. Hatt. Haszard is a registered 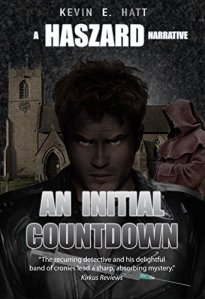 operating theatre practitioner, but when his and another car are forced from the road there is nothing to do but wait for the emergency services while the scoundrel responsible sped away. The more he reflected on the event the more he was convinced someone had driven the other car from the road deliberately. Regardless, it was a month until Christmas and he was determined not to get involved, but fate had other plans. News reached him about the mysterious circumstances surrounding the death of the Vicar of Frinton, aside from the intrigue he had no real interest, not until the discovery that the driver of the other car had been from the same place, and died on the same day. Then alarm bells started to ring. Mr Haszard has a skill for discovering answers to the impossible, and before he knew it he was promising the vicar’s widow that he would help to discover the truth. Little did he know the path it would take him down, nor how dangerous it would prove to be.

An Initial Countdown is the ninth book in the Hazard series and reads perfectly as a stand alone novel. Filled with a great cast of deep and vivid characters with their own distinctive personality making it easy to become invested in their lives. Suspense, and twists will keep a reader on the edge of their seats, unable to tear their eyes from the page. As for the writing style, wow, talk about immersive. The perfect combination of dialect and description with a very distinctive and entertaining narrative voice. This is the first book I’ve read by Kevin E. Hatt, but I am seriously considering picking up some more of his work.