Quantum was stuck, day after day, year after year living the same day. Like a twisted 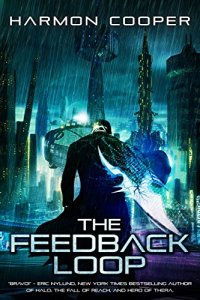 version of Groundhog day, bit filled with violence. He could set the time by who was attacking him, or the movement of trash. Every day was perfect repetition, although his actions changed small things, some days he died, others he didn’t. But Francis’ appearance changed his life in the loop. Strange things began to happen. He had been trapped by a glitch, and now there were people seeking to kill him, and they had the means to make his death permanent, if they got him he was dead in both worlds, the Loop and the real one.

The Feedback Loop plot is driven forwards by the main character, a man trapped in the same day, he keeps track by storing an item in is inventory for each day that has passed, these  range from basic items, such as a cheese grater, to a mini gun. You can imagine the fun that can be had. In a way this reminded me a little of something I read by Tom Holt a long time ago, but darker. I appreciated the humour, and the way living in this violent world affected and altered Quantum as a character. It was fun to read.