An old woman was seen fleeing the scene following the murder of a temple guard, and 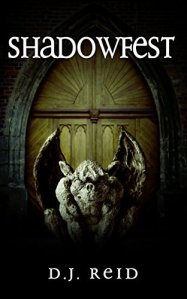 soon fingers are pointing towards Brona, the old apothecary. There is a great divide between those who can wield magic, and those who cannot, and the murder has caused great unrest, especially given the approach of Shadowfest. The timing of  this murder  seems a little suspect, and whispers of the return of a long dead killer echo through the silent corridors. But it has been a long time since evil forces breached the wall, but when the view between worlds is attacked its thinnest anything can happen, especially if it is all in the design of a being seeking their own darkest desires. Join the adventure in D.J. Reid’s Shadowfest, and see if agendas can be set aside in order to prevent the worst possible outcome.

Shadowfest is written in alternating first person and third person perspectives focusing on the characters central to the plot, clear headings make it easy to follow whose perspective you are reading, and with subtle differences in style between each one you really start to get a feel for the individual personalities of the characters. As a tale of magic and betrayal with some good attention to culture, world building, and magical application D.J. Reid  crafts a book that will appeal to fantasy fans. There is some beautiful descriptive, scene setting writing in places that really give you a feel for what is occurring and the environment. The steady pace gains a steady momentum, and in a story with dark forces, prejudices, suspicion and dark happenings afoot this servers to draw the reader deeper into the finely woven tale.