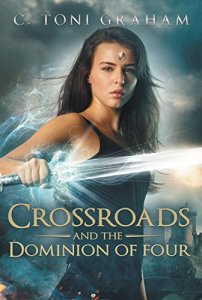 Otherworld—from returning to the mortal realm through a portal the four teen heroes, Jake, Shayna, Conner and Senegal, known as the Dominion of Four had taken drastic measures, sealing the portal between the worlds to keep Brigara trapped within the mortal realm. There was, however, a drawback. The price of sealing her had meant they too were trapped in a world that was not their own. But these four teens had been long awaited, it was said they would bring harmony back to Otherworld. They were destined for greatness, but when they don’t know who can be trusted, or what secrets are being kept from them how can they hope to succeed, especially when Brigara’s influence is extensive, and it seems they will never be safe from her reaches. Unravel the prophesies and unlock the truth in C. Toni Graham’s Crossroads and the Dominion of Four.

Crossroads and the Dominion of Four is a young adult high fantasy written by  C. Toni Graham. Readers are drawn instantly into a world of magic and magical beings as our young heroes make their way through the Otherworld in order to undertake the training they will need to become the heroes of prophecy. All the time, in the mortal realm, Brigara puts a new plan into motion. The impression of this magical world is continued in small details, such as natural remedies, leaf compresses, everyday things aligned to the natural and magical world. This unlikely group of friends form a team to be reckoned with, and you’ll witness the growth and development of their skills, friendship, and characters throughout their whimsical, action-packed, and danger-filled journey. This is a fantastic and magical read for lovers of everything that is fantasy, well deserving of five stars.