Special Agent William Garret, FBI, had been assigned to Holden for an unusual case. A three-person family murder which, given the strange symbols found at the scene, 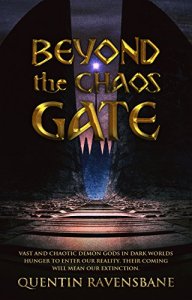 appeared to be the work of cultists. But the symbols were the least concerning aspect of the case. The bodies had been exposed to an unknown fungus, a devastating flesh-eating species which ensured the bodies had to be destroyed before it could spread. But things were far from over, three days later came another one, more grizzly and mysterious than the last, and the modus operandi, aka the killer’s M.O, showed a bizarre escalation. With no apparent link between victims it looked to be a tough case to crack, but perhaps some things are better left unsolved. Join Garret on a journey into darkness, madness, and the unknown in Quentin Ravensbane’s Beyond The Chaos Gate.

Reading Beyond The Chaos Gate reminded me a lot of a scenario I would expect to come across in the Call of Cthulhu table top role-playing game. In a manner that seems to be quite typical for Lovecraftian style fiction, it starts with an FBI agent drawn into the cosmic horror of the unknown, and attempting to understand and make sense of all that occurs. There is some good descriptive writing and scenes which in part will remind you of certain tales from Lovecraft’s collections. It was an enjoyable read with a mixture of horror and building friendships throughout. The incorporation of Lovecraft’s mythos and some adaption was nicely integrated into the plot as Quentin Ravensbane takes some foundations and makes them his own to spin a steady paced and interesting tale.

Beyond The Chaos Gate