When Molly won a trip to Mauritius she was over the moon. She was a happy person 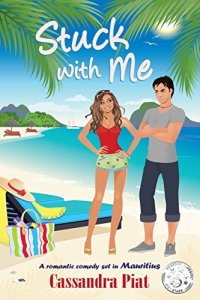 most of the time, or so it appeared, but this news had her dancing around in delight. Little did she know it was all an elaborate scheme, and she was the butt of this cruel joke. A newspaper had heard about her infallible happiness, and wanted to test a theory. They arranged the trip, and ensures their reporter, Adam, would be with her ever step of the way. It was his job to make this holiday, this source of happiness, a living nightmare, and test the boundaries of her sunny disposition. But Adam has more at stake in this façade than a story, if he pulls this off, he has the chance of his dream career, but can he bring himself to ruin the happiness of a woman he is quickly becoming drawn to in the name of a story?

This is a well written book, with an enjoyable plot. Whilst a rom-com the author successfully handles issues of mistrust, anxiety and pressure without making light of them. The main reason I gave this four stars instead of five was simply because the main character, Molly, annoyed me. Whilst she is twenty-five, I found a lot of her behaviour too close to that of a teenage schoolgirl, perhaps this was intention given that she’d not been in a relationship since she was seventeen and was a means to show her emotional immaturity in such situations. I’ve known my fair share of bubbly people in my time, but never quite anyone like her. Don’t get me wrong, it is an enjoyable read, despite my dislike for her character I was still turning the page wanting to know how the plot progressed and what happened next. For an author to achieve that shows no small skill in writing. Not quite my cup of tea, but an good read none-the-less.