The Rebirth: Future of Destruction by Adam Watt is a short dystopian tale focusing around Azral and her visions coming to pass 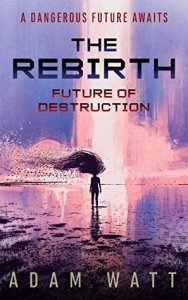 Azral is a psychic investigator for the LAPD.  In fact,  she is not just any psychic investigator,  she is the psychic investigator,  their first and most accurate. When she is called in to assist with a serial killer case by her contact Tom Damon she is reminded of her dreams. With a single glance she knows this is not a typical serial killer. She has seen this method of killing before, these injuries, but never in the flesh. Such images have haunted her visions for a long time now.  These creatures, these horrors, an inevitable future she had hoped to avoid. The battle for Earth has begun,  and now the future she once witness seems to play in all its horrific glory before her very eyes.

The Rebirth: Future of Destruction by Adam Watt is the prequel to The Rebirth Shades of Apocalypse series and it certainly piqued my interest for the series to come.  This is a short story,  at only six pages in length given its size and content it could easy be used as a prologue.  It reads as a scene setter,  a teaser and warning of things to come. It is a nice bite size tale,  and does exactly what I imagine the author intended. Watch the future unfold, and fear, for they have arrived.

4 thoughts on “Book review: The Rebirth: Future of Destruction by Adam Watt”