Kima is an inspirational fantasy written by A. H. Amin

Kima suffered a great cruelness at the hand of her peers, but little did she know that their act of hatred would be 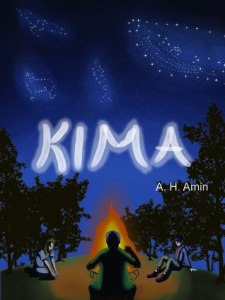 her salvation. She survived, they did not. Kima was not like other people, she had an empathy, a means to understand people with a single glance. But her skill did not stop at just reading the thoughts of people, it spanned into the world of nature itself. Perhaps this was the reason the black seagull had approached her when it did. The seagull wove for her a glorious tale, one she passed on to her own children. But her children could not understand of such things, they believed her fable to be the weaving of senility. Then, one fateful night, a young boy by the name of Alex happened upon something he should never have seen, he touched something he should never have touched, and once again it is time for Kima to tell her tale. Perhaps these children will listen, heed her words and lessons. In the meantime, the black seagull still flies, seeking a means to prevent the terror he foresees.
I wanted to love this story, I really did. The premise is magical, like fables of old passed through ancient texts and read at bedtime to the young. Whilst I have no doubt there are those who would adore every aspect of this story, I personally was unable to become invested. The writing switches from human to animal perspective, whilst unique, for me the animal parts were too long and although they were integral to the tale lacked the flow and pace to keep me interested. There is a nice moral/ lesson to the tale, but I won’t spoil it for potential readers by revealing it.
I would have loved to give this book more than three stars, but as objective as I can be I was unable to mark this any higher. It is a tale of great potential, but sadly, for me at least, it falls short.
Normally, I don’t like posting a three star review, however after contacting the author they were insistent I did, he advised, it is not the ratings he is after, rather the hope of spreading his story’s message. Kima will be released in December of this year, I have every faith that with a few tweaks this will prove a tale to remember.

Please note, I received a free copy in exchange for an honest review.