Reagan Somerset guarded a secret. It was the reason both the shifters and the humans 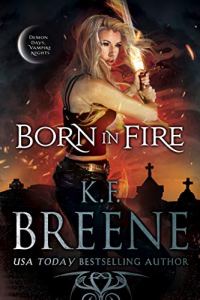 wanted her, but she had kept the truth of her heritage a secret a long time, and she wasn’t about to sacrifice that for the promise of a steady job. Of course, this left her only one option, to be a freelance bounty hunter, only able to take the most dangerous jobs, those that the people earning a regular paycheck would cast aside as too dangerous. She scraped by, but when an elder vampire stole her mark she was left in a precarious situation, and as if goading her, this bounty-thief presents an offer she would be a fool to refuse, especially in the absence of any paying work. A threat is taking the magic community by storm, but to become involved is to risk revealing who and what she really is, especially since part of the deal is she has to work close to a vampire, and everyone knows vampires can’t be trusted.
K.F Breene’s Born in Fire is a wonderful addition to the paranormal genre. Reagan, the main character, is kick-ass, powerful, overflowing with moxie, and an instantly appealing character. The first-person narrative gives the reader a chance to become fully invested in her and events as they unfold while allowing is to start to piece together the secret she has been hiding for so long. Watching the alteration in the relationship as vampire and bounty hunter are forced into difficult situations is an entertaining as the main plot itself. Mystery, intrigue, danger, and excitement make up the action-packed, sometimes comical adventure. With strong characters and a gripping plot, Born in Fire ticks all the boxes a paranormal tale should, including some amazing world-building and divides.