There are some books that should never be read. Some power and promises that are 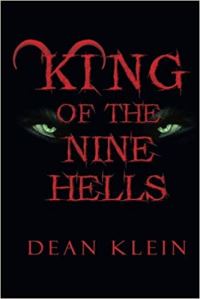 better left undelivered, lost in the flow of time. Such could be said about the Imprecation Sortairii. Forged in the dark ages its power is both ancient and terrifying. When an antique bookshop owner happened across it he could hardly believe his luck. It didn’t matter the tome was not for sale, and its acquisition, which should have eased some of his burdens, did nothing but add to them. It was sold and returned, deemed evil, haunted, and cursed, but that is just part of its lore. Any possessing it can have their dreams come true, for a price. Its last return came with a request, one which was not heeded and now threatens to unleash unknown terror on the world and all whose path it crosses.

Dean Klein’s King of the Nine Hells is a thriller/horror following spanning an era from the dark ages to the present day building up the events as they unfold. The author has multiple main characters, from the scriber of the grimoire to those whose hands it touches. With such a vast and timeless tale the author has ensured a clear indication of time and place at each chapter start making it easy to follow and understand, especially since each chapter adopts only one characters narrative. There is some great scene setting and developments. Threat, fear, and tension build from the first page to the last, with an ever-escalating threat that keeps you intrigued and both eager and terrified to find out what will happen next.

Book link: (I could only locate a paperback at this time.)

King of the Nine Hells