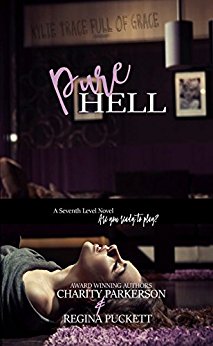 Pure Hell – Kylie had always seen the world differently,  she saw the spirits of people no longer in the realm of the living.  Her gift alienated her family,  if they couldn’t see it,  it wasn’t there.  But she saw it,  she knew this world to be part of the world’s design.  But she didn’t just see the that world, it saw her too,  and her presence,  her unique attunement to this world had her something to watch.  Amidst those she sees there was Septem,  a demon seeming to seek nothing more than to terrorise her to the edge of desperation, where giving her life seems to offer the only reprieve. But even then they are not done with her.  Caught between worlds Kylie follows Liam as he tries to solve her murder, her only comfort in being close to him.  But the other world isn’t done with her yet.  There is a role only she can fulfil.

In Hell Bound Wade Collins had his music,  and whatever was in his wallet. Music was his

life,  his love. Until he met Morgan. He was instantly drawn to her, her presence staring images of marriage and commitment, she was not a person to be cast aside, but for the sake of his career he had intended to do so. He had failed. But the road, and his career had beckoned and he had answered the call,  choosing to continue using his travels with his band,  but there was not a day that passed he didn’t think about her. Not a day where he was unfaithful.  Until Pamela came a long with an offer he couldn’t refuse. And he had tried. But even he had not understood the price. Pamela was not all she seemed,  and in exchange for the fame and fortune he aspired to earn he had unknowingly entered a horrific deal with the devil himself.

I have to say,  as a two book bundle it was a great read,  although my favourite of the two has to be the second one. It had a very similar feeling the the old TV series ‘The Collector’ where the  protagonist is forced to work for the devil and attempts to find a person redemption, or a loophole to free them, from the soul condemning deal before time runs out.  It was a great series,  and I see much of what I liked in this book. The plot was well-constructed,  imaginative,  and entertaining,  and the characters were individual and interesting.  The only thing that would have made this a little better would have been if some of the erotic scenes weren’t as crudely worded,  but that’s just down to personal taste.  It was a great story and an entertaining read.