Disappointed, let down, and stood up, again. After being ignored all summer Penny knew 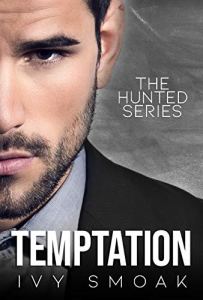 it was time to move on, so why was she still waiting in the coffee shop when she already knew he wasn’t going to show? Perhaps because fate had other things in mind. A chance encounter. He was tall, dark, handsome, and unfortunately the lecturer in her most despised class. She had always followed the rules, always. But there was something about Professor Hunter that made her want to be bad, made her want to make him notice her. He wants her, she wants him, it should be simple right? But he has his own secrets, demons still haunting him from the past that could destroy everything. It’s the best sex of her life, and the most confusing. She wants more, but she also needs to know him, to uncover the truth which seems to haunt his present.

Ivy Smoak’s Temptation is the first book in The Hunted series.  I picked this up because I enjoyed the Made of Steel series so much I wanted to see what other majesty this author could weave and she does not disappoint. Steamy, sexy, forbidden, it is everything a reader wants from an adult romance. The sex is epic and leaves you yearning while Professor Hunter’s evident addiction to Penny will make your pulse quicken. With secrets, twists and turns, and a gripping narrative this is yet another book you’re not going to want to put down. Snuggle down for the night, have a cold glass of water to hand, and allow yourself to sink into heart-pounding, lust-filled, confusing, and contradictory romance. They both want what they know they shouldn’t, yet neither can look away, or at least not for long. That is, until the truth comes out.