In M.L. Lloyd’s Perils of Immortality, Harry Higgins was overdue his sleep in the status 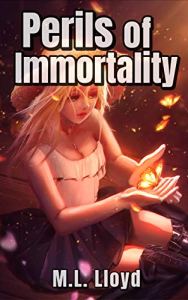 deep sleep system, but since the Winter purge the systems which allowed these ancient humans whose conscious had transcended mortal flesh, to retain their sanity, had been offline. As much as he hated to admit it, the fevers and hallucinations warned of his decline expiration fever was setting in. When he found Kora, an unusual AI placed in a LaPoetan husk, she piqued his interest. Not only was such a thing an act of treason, but this artificial intelligence was convinced of her own humanity. Her insertion into his life brought with it just the distraction he needed, and he vows to make her able to fool anyone into thinking she is a transcended human, what started as an innocent wager between friends, soon turns into something that could see both himself and Kora destroyed. There is more to her than meets the eye, she alone sees the kingfisher tormenting him, and he finds himself swearing to help her, in exchange for her aid in winning his bet. Will he discover the secrets f her unusual situation before his own sanity wanes?
Perils of Humanity by M.L. Lloyd is a Dystopian fiction based in future where immortality can be purchased and life can continue by the transference of consciousness into a new body, called a husk. Harry Higgings, nearly 800 years old, is disillusioned with immorality, more so recently as he notices the growing population and finds himself further disconnected from the race he was once part of. The futuristic world-building is impressive with great ideas and technology that will tantalise the science fiction lover, while the involved character plot, mysteries, and intrigue will ensure you have plenty to keep you turning the pages. I found Harry’s character fascinating, on the cusp of his own demise, attempting to hold on, yet believing he has no fear to release himself. His role is that of a cantankerous old man, but he is not beyond his own amusements and connections, making his interactions entertaining. Written mainly from Harry’s first-person perspective you are granted a unique insight into his mind and thoughts, while being drawn into a well-described world. Surprising revelations, discovery, and drama will keep the reader entertaining and questioning the true turn of events.