Finn had been swept away into a world of military, following in his father’s steps, his one 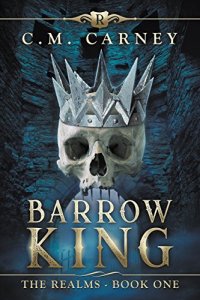 relief was he believed his sister had avoided becoming one of the colonel’s minions. He had been wrong. She had infiltrated and become trusted by some very powerful people, and during this time discovered something which cost her dearly. The game world, the Realms, was not a game at all, and Alistair had exploited the system to conquer and become a god. Brynn too had ascended, but lost everything she was in the process, forever trapped. Her only hope was Finn, entering the game and rescuing her mind. She rigged the system to aid him, sent allies who would be beside him in the starter of town of… Error. Damn that wasn’t right. Where was his aid, where was his starting town? Finn is alone in The Barrows, no help, no allies, and something old has awakened, and it can taste the rare item Finn has in his possession. The Barrows were feared, a sentient dungeon, can he use his instincts to survive, escape, and save his sister, or will he become another rotting corpse upon the dark tunnels if this twisted warren?

The Barrow King is a litRpg by C.M. Carney. If you’re the type of reader who favours a more system orientated read with in depth skill descriptions then this will certainly tick that box. Of all the litRPGs one read to date this one spends a good portion with the ‘in game’ pop-ups, they help the character make skill choices and guide his path. The Barrow is a sentient dungeon, so whilst there is other things occurring, side quests, potential allies, etc, it focuses mainly on the dungeon aspect as Finn, in game name Gryph, works his way through hoping to find am exit, his enemy, and tries to find his sister. He encounters unlikely allies, new enemies, and even help from unexpected sources.