Courage of Ansgar is book 21 in the Windflower Saga by Aleksandra Layland.  Edmond of Ingar had been raised in Aspatria, away from his birth place of Kimbria. They had left 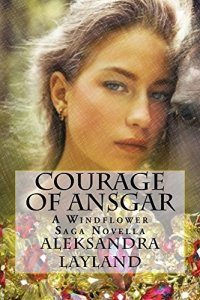 when he was a boy, and he had not so much as return for a visit. How he had been elected to be their king was beyond him. His mother made it clear that decline, whilst a possibility since there were other people who could fit the requirements, was not really an option. But perhaps what he finds more daunting is that she is arranging for him to meet a consort from each of the four influential families. She doesn’t want her son to take the throne a bachelor but concedes if none of the four make a suitable partner she will leave him to his own devices. The problem was, he wasn’t convinced that the person he met would be the same person he married. A week of pretended was of little relevance where a crown was concerned, and he could very well find himself bound to someone so opposite to who they had pretended to be. Fortunately his cousin has the perfect plan.

Courage of Ansgar is a great read, the kind you can pick up and lose yourselves in effortlessly. I grew to really enjoy the characters, their interactions and exchanges. It was nicely portrayed and I really admired Kerys’ character, a strong woman, whose skills and thoughts have made her, and her line, be viewed as somewhat anachronistic. The story flows with an ease, at a good pace and is driven by character interactions. Whilst most readers will find some of the plot a little predictable, rest assured there may still be a surprise or two in store. I have read one of the other books by Aleksandra Layland, but I did find that this worked as stand alone, whilst the knowledge of the cultures enhanced the story, the author did a splendid job of ensuring it didn’t require to use the preceding books as a crutch to support it. This is a sweet story of romance, love, support, and war, ingrained with the true virtues of relationships.