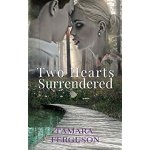 Luke, a young boy with a troubled past, sought a moment’s reprieve from his step-father’s abuse. He ran until his legs could carry him not further, and straight into the arms of fate. He saved the life of a young girl, but never could he have imagined the woman she would become, or her importance. No matter how hard he tries to resist. But just as he embraces the inevitable he is called back to war, and the man who returned was not the same as the one who left.

Two Hearts Surrendered by Tamara Ferguson is a beautifully written romance with believable and engaging characters. You can’t help but be drawn in and invested in the plight of the characters. The author’s style creates a perfect balance between vivid imagery and great interaction. Being the first work I have read by this author I can honestly say she has captured my attention and I will be reading some of her other work.