Tell us a little bit about yourself.

I grew up in Orem, Utah right at the foot of the Rocky Mountains. I 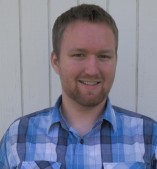 spent my childhood hiking, camping, rock climbing and doing any other outdoor activity I could.  I still lives in Utah with my wife Lauryn. We’re expecting our first child this year.  I have one book published with two more coming soon.

What are your hobbies?

I love anything outdoors. Rock climbing and repelling are some of my personal favorites, but I love hiking, camping, kayaking, and scuba diving. When I’m not doing something outdoors I love reading, writing, and watching shows and movies. Right now I’m slightly addicted to watching Daredevil on Netflix.

Which writers inspire you?

I’m very impressed and inspired by the work of Brandon Sanderson. It amazes me the detail involved in the worlds he creates, and the sheer number of quality novels he’s written. I’m also intrigued by the interconnectivity of each of his books.

For your own reading, do you prefer e-books or paper/hard back books?

I love the feel of a real book. There’s just something satisfying about owning a hard copy of a book. That being said, ebooks are so much cheaper and so much more portable, that I read almost exclusively ebooks and then buy paper copies of books that I liked enough to want to have on my bookshelf at home.

What are you reading at present?

What is your favourite book and why?

Although it’s really nowhere near being in the same genre as what I write, my favorite book is Moby Dick by Herman Melville. It’s long, it’s old, and it’s most certainly not a sci-fi or fantasy story, but I just really enjoy reading it. It has a really interesting story with rich and deep characters.

What is your favourite film/ series and why?

It’s not easy to pick just one especially since I change my mind on which one is at the top about every two minutes, but I really enjoyed the Firefly series and its accompanying movie, Serenity. I just love the dialogue. It’s some of the best comedic writing for a show that I’ve ever seen.

What do you feel is your greatest accomplishment?

Not to be too cheesy, but my greatest accomplishment was marrying my wife. She’s awesome and I just cannot brag enough about her.

How do you relax?

For my best relaxation it’s a bit of a process. When I have time and need to unwind I love to go out and do something physical and outdoors; rock climbing, sky diving, hiking, whatever sounds fun at the time. I go do it until I’m feeling really sore, and then I’ll sit in a hot tub for a while. Once I’m nice and relaxed, I’ll come home and either read or watch a movie or a show. By the time I’m done with all that, I feel great.

What advice would you give to aspiring writers?

I would say to write the story you want to write and don’t be afraid to suck. So many people want to tell a story, they build it up in their minds and just love it. Then they write it and don’t get a great response, but the truth is that nobody writes a great story on their first try. If you love your story, then don’t let other people tell you it’s no good. Do a good job going through the editing process and work hard to find your audience. If you love it, then there are other people out there who will love it.

If your friends could use one word to describe you what would it be?

What made you realise your calling as an author?

I actually tried writing for the first time because my brother decided that he was going to write a novel. I tend to be competitive with my brothers so if he was writing a novel, I was determined to write a better one. I came up with a story and wrote it down, and found that I absolutely loved the process. By the time that book was done and ready for publishing, I knew that writing was something I wanted to do for the rest of my life.

Where do your ideas come from, what inspires you?

Anything interesting that I see. For sci-fi I get a lot of inspiration from watching science shows like Cosmos. As I learn about new scientific principles I wonder what would happen if this principle could be used to accomplish something new and then a story starts to form in my mind. Sometimes inspiration is just that simple.

How long on average does it take you to write a book?

About a year total from start to finish. Sometimes I move a little quicker depending on how well I’ve figured out the plot before I start writing. For some stories I move quickly because I know exactly what I want to happen. Sometimes I have a concept that I love, but actually forming the story into something that works takes months.

Do you work to an outline or plot or do you prefer just see where an idea takes you?

A bit of both. I prefer having an outline, but sometimes the best way to come up with a good story is to just start writing one.

What is the hardest thing about writing?

Honestly, the hardest thing about writing is finding the time to do it. Life is hectic, and good writing takes time to do. If you want to be a writer who isn’t a total shut in the balance between writing time and social time can be pretty hard to find.

What is the easiest thing about writing?

I don’t know that doing good writing is ever actually easy, but a lot of it is really fun. Coming up with the stories and writing the first draft are probably my favourite parts.

Do you ever get writer’s Block and if so, how do you deal with it?

All the time. Honestly I feel like writers block is different for me every time. Sometimes if I just take a week off, the writers block goes away naturally, but sometimes I just have to sit down and write a couple of bad chapters to work through the writer’s block. It all just depends.

How many books have you written, which is your favourite?

I have one book out and another coming out this August. I like both of them a lot for different reasons. My first book, A Soul Divided, has a lot of fast action and quick wit that makes it a blast to read. I love Drake, the main character of that book, and I think that writing him is a total blast.

On the other hand, my next book, The Key to the Demon’s Gate, takes a slower pace with characters who are a lot less snarky than Drake, but it features a wide cast of characters who are all very entertaining in their own ways. The comedy stays constant throughout the book and makes for a fun story.

What are you working on at the moment?

Right now The Key to the Demon’s Gate is going through editing and will be released this August. I’m also hard at work on Taking Life, the sequel to A Soul Divided. It will pick up where A Soul Divided left off and answer many of the questions left by the ending of A Soul Divided.

What genre are your books?

I write sci-fi and fantasy books.

What book titles have you released so far?

My only book at the moment is A Soul Divided, Book 1 of the Blood Fire Trilogy

Tell us a little bit about the series.

The Blood Fire Trilogy focuses on a war between the religious alliance of the Mystics and the Human Empire. Drake Ashbell is a man caught between warring nations as he seeks to overcome his own personal demons in the midst of a galactic war, while being pulled into a greater conflict than anybody had ever imagined.

Where can we buy it?

My books are for sale on Amazon.

Give us an insight into your main character. What does he/she do that is so special?

Drake Ashbell is the luckiest person alive, literally. As one of the last living members of the Fortunatus race, he was born with superhuman luck. He runs his mouth off too much, and his methods are unorthodox at best, but he always gets the job done.

In what formats is your book available?

As an ebook as well as in paperback

When is your next book due for release?

A Soul Divided (The Blood Fire Trilogy Book one)

Vhy’Rai, the power of the gods, was gifted to the Mystics with three restrictions:

Those who dare to commit one of these taboos become immortal, but the immortality of one comes at a cost to many.

As the galaxy is torn apart by war between the religious empire of the Mystics and the technologically advanced Human Empire, Drake Ashbell finds himself caught up in a conflict that will take him to distant worlds, make him face his tragic past, and test the limits of his soul.

The Key to the Demon’s Gate:

The great demon Eshteroth plagued the land of Artenia for hundreds of years until a group of powerful wizards banded together, combining their magic to banish the demon to

Henry Rockwell, his best friend Karl and his secret crush Alanah, who happens to be Karl’s girlfriend, are a normal group of Seattle teens, until a simple trip to the movies to celebrate Henry’s birthday ends in the arrival of an otherworldly demon. To complicate things further, Henry and his friends don’t just witness the arrival of the demon, they switch places with him.

Thrown into a brand new world of magic they quickly learn that they have inherited a portion of the demon’s magic power, but the demon will be returning in one year’s time. And the three of them are expected to fight him.

In order to prepare for the upcoming battle and save the world, the three friends must learn about their new world and master their magic powers before the demon returns.

Connect with the author: